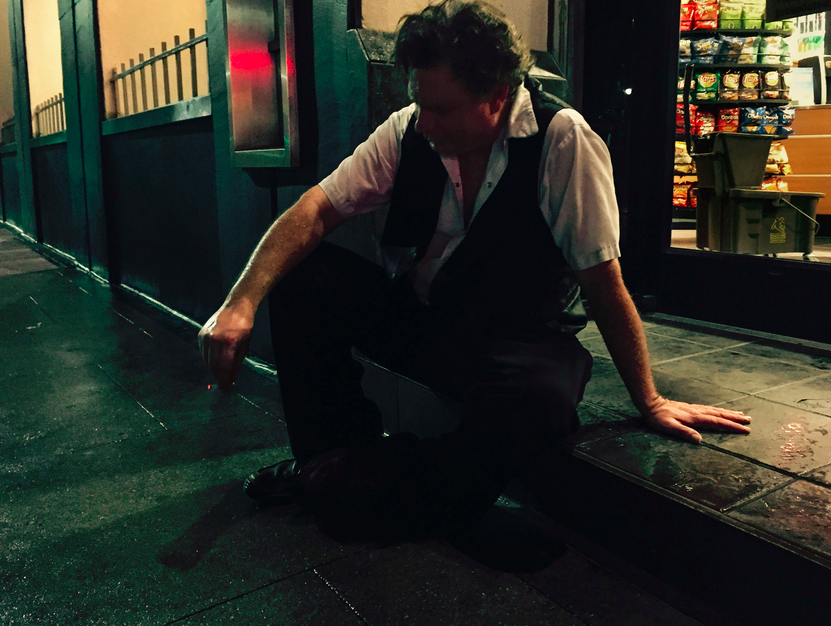 I think it must have been 1982 or ’83, my freshman year at UNC. We’d spent the evening crawling Franklin Street when we got word of a “late night” at the SAE house. Now, these things were legendary parties, and if you heard about one, you’d better make sure you were there. The cutest girls, lots of beer and who the hell knows what would happen by the end of the night. We headed that way, and when we arrived, it was already crowded. Weaving my way through the crowd of sweaty, drunken frat boys and sorority girls, I suddenly heard music – very loud music – coming from the stairway that led down into the basement. So that’s where I headed. What I saw next would not only leave a permanent imprint on my college life, but inform my tastes and interest in music from that point on.

I waded down into a smallish room full of people standing in a sea of beer cans and ankle deep water, and there before me were three young musicians creating a wall of sound I’d never experienced before. One on upright bass. One on a small drum kit, and the one in the front playing a beat up Silvertone and screaming loud, raw, primal rock and roll like a crazed, wounded animal. Dex Romweber, Tone and Crow. The Flat Duo Jets.

Now, I’ve never been in a room with Jerry Lee Lewis, Elvis Presley, Gene Vincent or anyone of that vintage. But I could only imagine how being that close to any of those musicians would have the same visceral punch as I was getting from Dex and the Duo Jets. Electricity. Charisma. Abandon. I’d been to many concerts, but this was something completely different. It was old, but they were making it new. Making it their own. And from that point forward, I was hooked.

I saw the Jets a few more times during my days in Chapel Hill, and followed them from a distance as I started my advertising career, moving from Birmingham to Asheville to Cincinnati and Dallas. I saw them on Letterman. I read about them in the mainstream rock magazines. I watched their career trajectory. And I was always happy that their music had found an audience on a national scale.

Well, time passes fast and in 2003 my wife and I along with our young son moved back to the Raleigh area, and I began reconnecting with many of the musicians I adored during my college days. I also started filming a music documentary on the 80’s decade of North Carolina rock and power pop. I had the privilege of interviewing my heroes: Don Dixon, Rod Abernethy, Robert Kirkland, Mitch Easter, Terry Anderson & Jack Cornell, Jeffrey Dean Foster, Jon Wurster, The Pressure Boys, The Connells and many, many more.

And I reconnected with Dexter, which resulted in one of the best interviews I’ve done. We both had many years under our belts since that night in the SAE basement, and Dex had many hard miles on him. He’d experienced the ups and downs of music celebrity and critical praise, inspired artists such as Jack White and Cat Power, and did a lot of things to himself that if he had it to do over again, probably wouldn’t.

But he was still making wonderful, soul piercing music, drawing on the good times and bad times of his life and putting them into song.

A couple of months ago, I ran into Dexter at the Cave, a Chapel Hill institution. It was Sunday night, so the crowd was small. He recognized me, shook my hand and thanked me for buying him a hotel room in Dallas several years before when our paths crossed out there and he and his drummer were sleeping in their van as they made their way from Louisiana to Oklahoma. I was amazed that he remembered, but he said, “I’ll never forget what you did for us out there. I can’t thank you enough.” I asked him how he was doing, and he said, “Not real good. I’m having to sell my guitars and equipment to get by.”

I asked him if he’d be willing to play some house shows, and he said yes, so I began helping him books a few gigs. One of those gigs was with Rod Abernethy at his Downstairs at Neptune’s series this past Wednesday night. Alternating between mournful and frenzied, Dex did what Dex does – electrify, mesmerize, hypnotize and captivate the audience. He told stories of heartbreak. Shared experiences of self-abuse. 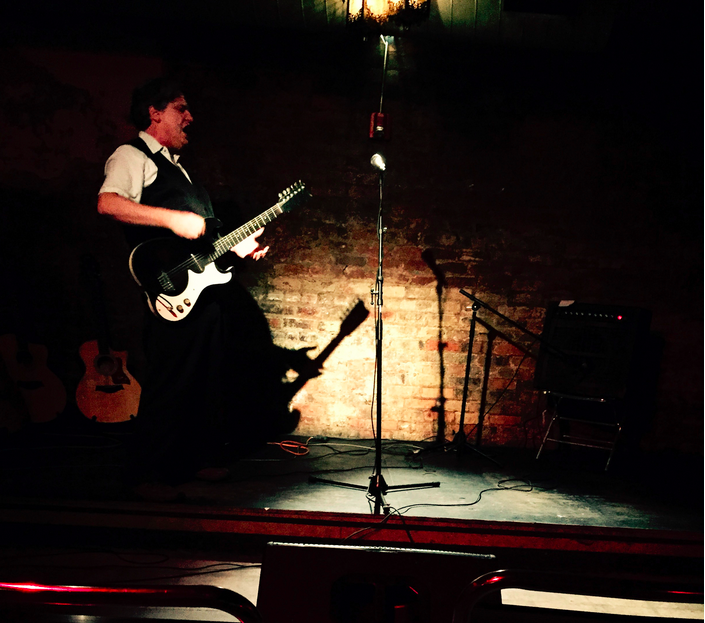 He talked about conquering his devils and coming to terms with his own morality. But most of all, he entertained us. And we walked out feeling like we’d been hit by a powerful force. There were some young kids there – teens and early 20s, and I watched the looks of disbelief on their faces as Dex played. It was like they were discovering something completely unknown to them. A new element unearthed by time. I was amazed as he pulled out the song, “Smile,” written by Charlie Chaplin in 1936. And a song called, “Paradise,” which he’d heard on the Dick Van Dyke Show. He knew the lyrics by heart.

He is still a force of nature.

When the show was over and I was helping Dex carry his amp and guitar up the stairs and into the rainy Raleigh night, he turned to me and said, “Mike, I’m so glad you could be here tonight. I can’t thank you enough for all you’ve done for me. I made you something that I want to give you. It’s in my car.” We carried his gear across the street, and as he opened the door to his backseat, I was struck by the clutter – empty cups, fast food boxes, musical equipment, show flyers, piled up in the back. Dex rummaged around and pulled out a piece of paper. “I made this for you,” he said, as he handed me a drawing.

Dex, you made my night. I will treasure this forever. 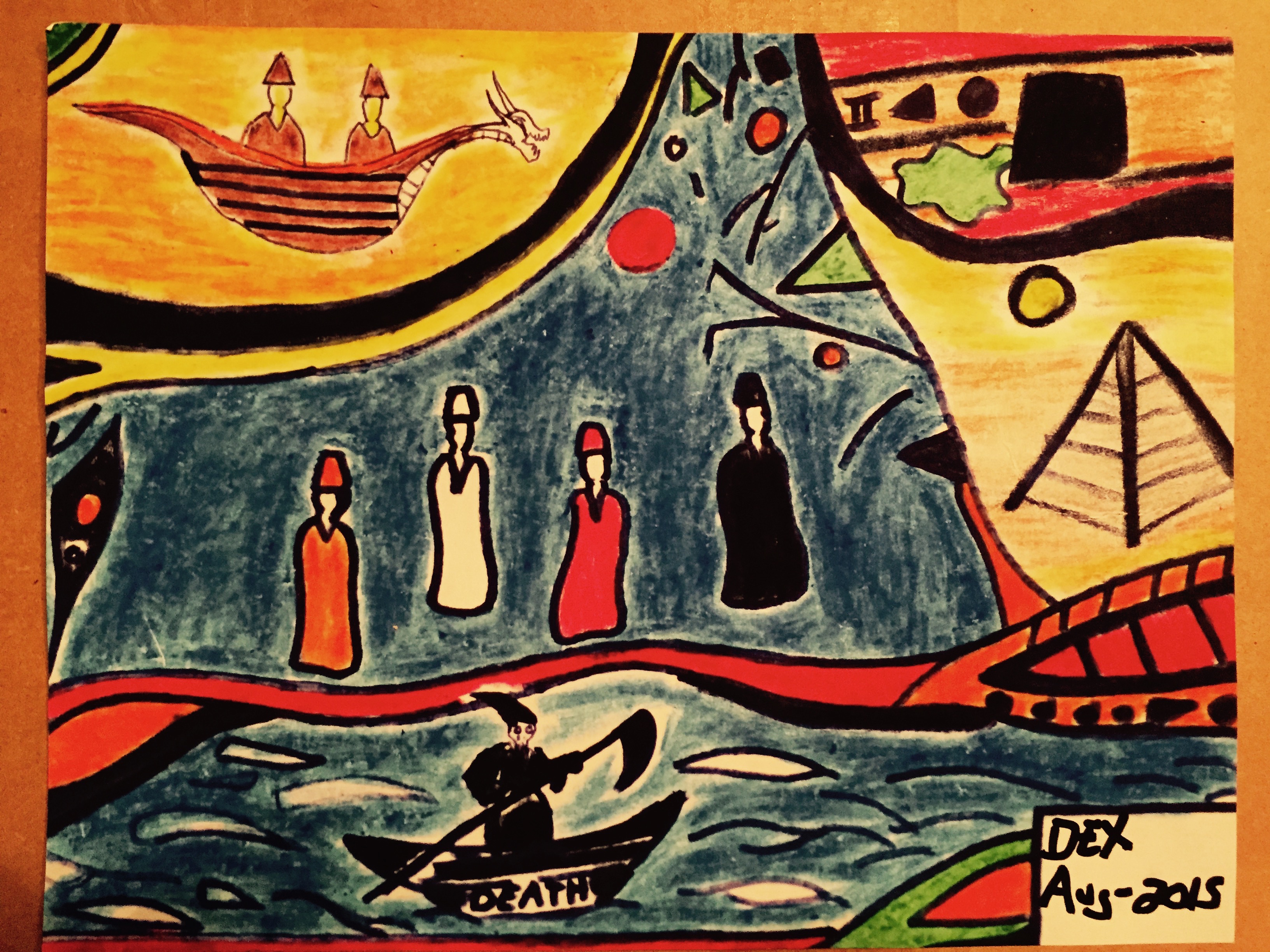