I remember showing up the first day of classes and feeling completely overwhelmed, lost and angry. I looked at every day as an endurance test – how could I make it through and just go home? I absolutely hated it.

Then one day, I met Russell Clary. I’m not sure if I met him in a class or in the cafeteria, but he changed my final year of high school. Russell took me under his wing and began introducing me to his friends. And he had a lot of friends. In fact, he seemed to know everyone. And everyone knew Russell. And to this day, I’ve never heard anyone say a bad word about him. Which didn’t hurt as he was helping me with the friend-making process.

I might also mention that Russell was a great athlete – a starting offensive guard on the soon-to-be state championship football team. A team that went 14-0 and completely dominated everyone they played that year. And that didn’t hurt either as Russell was helping me make friends.

That year turned out to be the best of my high school career. I made more friends in those nine months than I’d made in the previous three years. Through Russell, I met many of the people who to this day remain my dear friends.

After graduation, we all went our separate ways. I to UNC-Chapel Hill and Russell to four years at The Citadel in Charleston. We didn’t keep in touch much during those years. We were finding ourselves and living in our own worlds. I heard from time to time things about Russell – that he was back in Charlotte in the insurance business. But we really didn’t talk and (without the benefit of the Internet or Facebook or email back then) we just became disconnected.

I didn’t see him at our 10 year reunion, or our 20 year reunion. But three years ago, I heard from friends that Russell had been diagnosed with ALS – Lou Gehrig’s Disease. And that a group of South Meck grads were gathering in Charlotte to walk for him and raise money to help find a cure.

In 2010, I drove down and saw many of my old classmates, and reconnected with lots of people. I also saw Russell for the first time since 1982. His eyes lit up when he saw me, and although he was having trouble walking, he shook my hand, gave me a hug, and told me how happy and appreciative he was that I’d made it. I wasn’t able to do the walk in 2011 because of an out of town business trip, but I monitored Russell through out network of friends and made a donation to the ALS foundation.

Which brings me to this weekend. April 27-29, 2012. I’m here along with 100+ other South Mecklenburg High grads for our 30th reunion. And the planners of the weekend had the foresight and inspiration to schedule it on the same weekend as Russell’s walk.

This morning at 9:00 AM, we all gathered at Independence Park wearing our Team Clary shirts, greeted each other with hugs and a few tears, and gathered around Russell once more for our annual team photo. I was able to get a few seconds with him, and although he’s lost the use of his arms and hands, is confined to a wheelchair and has difficulty speaking clearly, once again his eyes lit up when he saw me, and he tried as best he could to tell me how much he appreciated me coming to the walk. And when he threw his head back and laughed, the old Russell was still there, with a wicked sense of humor and a smile for everyone.

I’m proud to say Team Clary won “most walkers” for the third year in a row – 125. And our team raised over $16,000 for ALS research. But the thing I’m most proud of is that 30 years later, many of us are willing to stop what we’re doing in our lives and take a couple of days to honor Russell.

Tonight we’ll gather for our “formal” reunion dinner. And I hope Russell will have the energy to be there. He is enrolled in a clinical study that doctors are hopeful will extend the lives of ALS patients, but none of us know for sure how much longer we’ll have him in our lives. I for one, cherish every minute.

It’s been a tradition every time we get together to paint the rock in front of the high school. For the past few times we’ve been here, we’ve painted it in honor of Russell. Today was no different. And as I get ready to head over to the restaurant, my thoughts turn to the guy who befriended me those 30+ years ago. A guy who simply took the time and made the effort to help me out. A guy who really didn’t have anything to gain by being my friend. Tonight, as I get a chance to reconnect with my classmates, I’ll think of the man who connected me in the first place, and made such a huge difference in my life. Thank you, Russell. 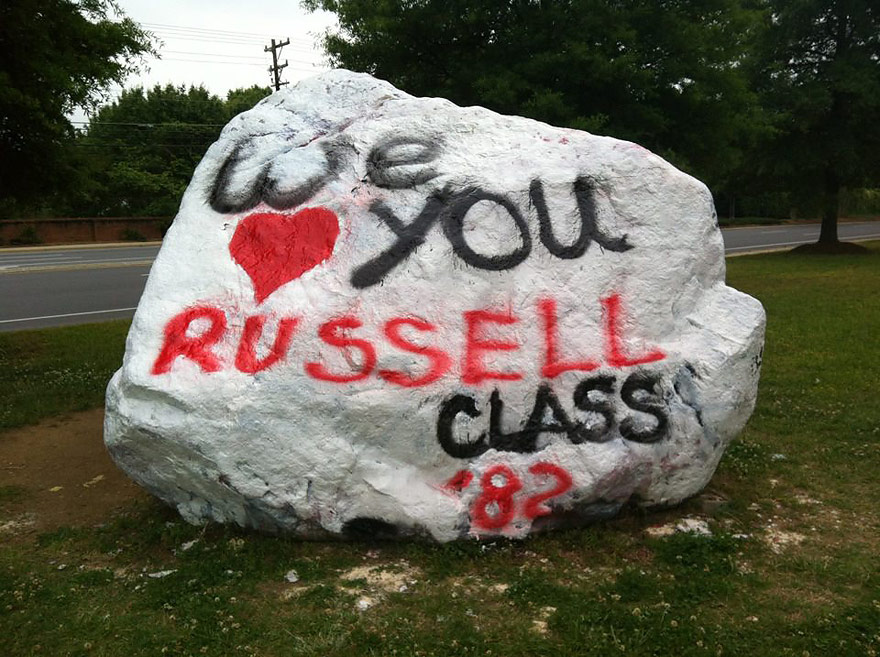 I can’t remember the first time I heard The Band. I think maybe I caught The Last Waltz on some late night channel in my youth. At the time, I really didn’t know who they were. I do remember being amazed at Robbie Robertson’s playing. And the sad,…