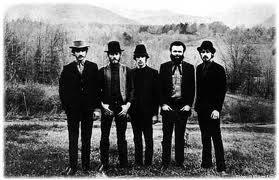 I can’t remember the first time I heard The Band. I think maybe I caught The Last Waltz on some late night channel in my youth. At the time, I really didn’t know who they were. I do remember being amazed at Robbie Robertson’s playing. And the sad, mournful singing of Danko and Manuel.

But what always stood out to me was The Night They Drove Old Dixie Down, sung by a drummer named Levon Helm. Having been born and raised in the American South – Alabama to be exact, I’m very familiar with the Civil War. There were and probably still are many ghosts roaming around the fields and woods of North Alabama. But I’d never quite heard the Civil War…sung…the way Levon sang it. It chilled me to my soul and still does to this day.

At least 2-3 times a year, I’ll either play Waltz all the way through on CD or on TV, and I’m always captivated by the artisty and skill of the songwriting and playing. And while Robbie Robertson was the chief songwriter and most visible face of the band, I believe it was Levon who brought the grittiness and realness to it – with his presence behind the kit – sparse drumming yet so solid and so dead on.

And his voice. If texture and lines and wrinkles and pain and hardship and tears could be caught in a bottle, it would sound like Levon Helm when it was opened.

Today at lunch, I was given a tour of the Southern Folklife Collection on the UNC campus. It was a nice respite from the world of advertising – at least for an hour or two. I was blown away by the sheer volume of archival music they have. I saw the collection of Mike Seeger, which had recently been donated. I reels and reels of the original film from Ken Burns’ documentaries Baseball and The Civil War. I saw tens of thousands of LPs, 78s, 45s, cassettes, 8-tracks, wire recordings, and even original wax cylinders from Edison’s era. All created just to capture sound. Music. Soul.

It struck me tonight as I was reading all the online rememberances about Levon, that at the very same time I was deep in the stacks at Wilson Library marvelling at the music and reading titles of albums and just trying to take it all in, he passed away. Another good one, as my grandparents used to say, who “got away from us.”

I’m at the age where these things, these odd coincidental events, always give me pause to stop and consider what a gift music is. Not just to those able to make it, but to those of us fortunate to hear it and let it touch our souls. And the fact that a place like the Folklife Collection is going to extraordinary lengths and costs to preserve this music is something that will stick with me forever.

I’m glad I was where I was when Levon left us. Surrounded by music much like he was surrounded by friends and family.

When I got in the car to drive back to work, I put The Last Waltz on, dialed up Ophelia and just sat in the parking deck and listened.

And I hope that wherever Levon is tonight, he heard it, too.