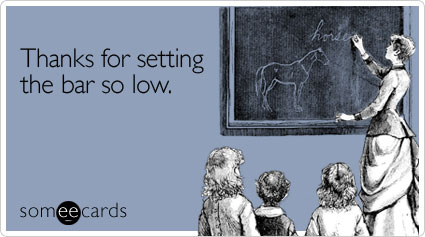 A note: this is going to probably piss a lot of advertising people in the Triangle area off, so I’ll just forewarn you.

I wish the actual work in the show would have been half as good as the gala.

Maybe it’s a sign of my age or years in this business, but I’ve come to believe that award shows – especially local shows like this – are the main culprits behind the mediocrity in most of the work. (And don’t get me wrong, I lump myself and my agency into that criticism, too.)

What’s happened to fresh, original thinking? What’s happened to that “wow” feeling I get when I see something in CA or The One Show that is just…completely differerent and unexpected and delivered with copy and graphics that I’ve never seen before.

It’s the kind of stuff I really wish I’d done. And I can say that about very little I saw last Friday night in Dorton Arena.

What the hell has happened? Is it because we have mainly local and regional accounts that we’re thinking on that scale?

Does anyone still open a national or international award book and compare their work to the stuff in it?

I saw creatives clutching their ADDY awards with expressions on their faces like they’d just won an Academy Award. Seriously?

If this is the bar we’ve set, we’re doomed.

A few years ago (far too many years ago, in my opinion), McKinney entered our local show. And they usually dominated it. Maybe they got tired of winning – I don’t know. But I wish they’d start entering it again if for no other reason than to kick all our asses and light a fire under us and make us strive to do something better. Much better. More risk-taking. More engaging. More strategically sound and creatively daring.

Have we all fallen under the spell of social media to the point where nobody can come up with a big idea anymore? Are we tweeting and posting instead of actually thinking? Or are we simply judging our creativity based on our clients’ level of happiness with the work we do?

I don’t know the answer. But if we continue, we’ll vanilla ourselves out of jobs. And existence.