A couple of months ago, I had the great pleasure of having Stevie Archer, one of the first interns I hired at RBW (and later hired full time), as a guest speaker in my UNC copy and communication class. I’d tried to follow Stevie’s career as she went from RBW to Mullen to now McKinney. And I have totally enjoyed watching her become the star I always knew she’d be. Stevie was the first and only intern I’ve ever hired to have actually produced a TV spot – she wrote a fantastic :60 spot for Duke Orthopaedics that Raymond Bark shot. It’s beautiful film. I knew she was a great writer and always had a insatiable curiosity to just…create.

But I was floored by what she showed the class – just stuff she’d done in the “spare” time you have when you work at McKinney (McKinney, by the way, is a lot more than an agency. They encourage their employees to spend their spare time just thinking of cool stuff – different ways to be creative that have nothing necessarily to do with advertising. And if they like the ideas, McKinney helps get them produced.)

So, Stevie showed a couple of ideas that she and her friends had not only thought of, but actually produced. The first is this: http://twerribletowel.com 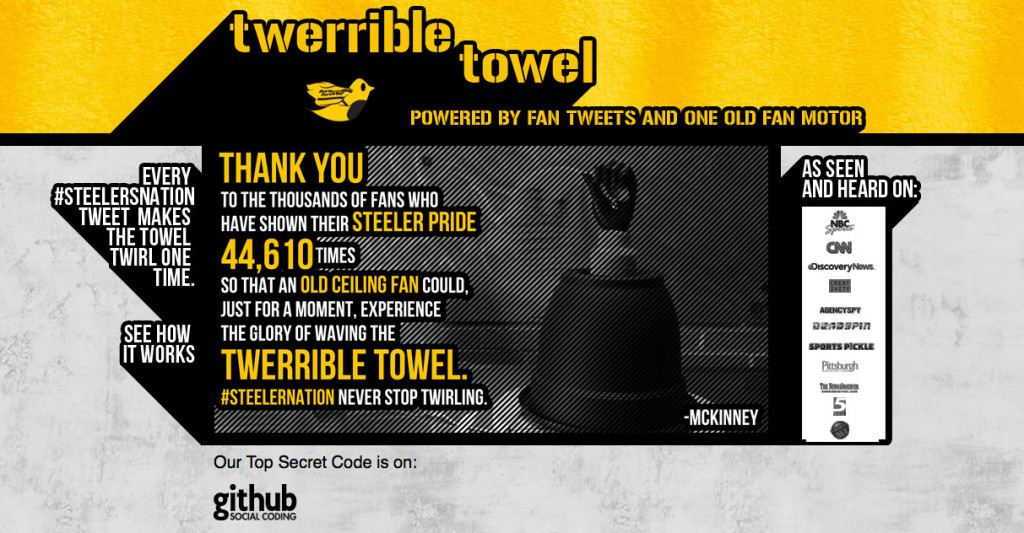 It’s the first Twitter powered NFL fan towel, a thingamajig they thought up and rigged up with an old fan motor and a Steeler Terrible Towel. You tweet with the hashtag #steelernation and the motor turns, waving the towel. It got so popular so fast that the NFL wanted to use it for the other teams. Again, nothing necessarily to do with advertising, just a cool ideas for using social media for something completely unexpected.

Another site Stevie created is this: http://www.iwasthecoolestkidever.com

It’s just a site where people can post photos of themselves as kids being cool. Nothing fancy, just fun. It’s gotten so popular that she’s actually been able to sell ad space (albeit small) on the site. At least it covers the hosting fee.

And here’s a more recent site she worked on: http://poorbabies.tumblr.com

Its a site where you can post photos and report young children being humiliated in various ways including being forced to wear unfortunate clothes and do unfortunate things for their parents’ amusement.

My point is, Stevie is doing what creatives should be doing: being creative ALL THE TIME. Not just between 9 and 5. She’s one of the rare members of her generation who doesn’t sit around twiddling their thumbs when they don’t have real work to do. They refuse to let their minds sit on idle. They are always thinking. Always.

Stevie’s presentation to my class not only thrilled me, it inspired me and lit a fire under me at the same time. As I get older in this business, I find myself looking forward to getting away from it one day. And I hope I’ll have a great retirement and not miss advertising. But her presentation reminded me that we’re in the business of ideas – not ads – ideas. And that we have a gift to create stuff that nobody’s ever seen before, and do it on a daily basis if we choose. And that should never be a burden or a job or a task. It should be embraced, celebrated, relished and practiced as much as humanly possible.

So thanks, Stevie, for reminding me why I got into this business in the first place.